Since 2016, the GPJ  team has been partnering with Japanese game developer Capcom to produce their premier esports event: Capcom Cup. Their flagship fighting title, Street Fighter V, regularly draws thousands of competitive players and in-person/online spectators, pitting strategy and finesse against the best of the best. This event capped off a year of regional tournament play to crown the best Street Fighter player in the world. GPJ worked with Capcom’s partners to oversee the Tournament broadcast, sponsor activities, venue management, after-party and half-time entertainment to deliver the best fan experience.  The Capcom Cup featured over 250 of the best Street Fighter players with commentary gameplay produced and streamed live on Twitch that engaged over 3 million unique views. Behind the scenes at the HyperX Esports Arena in Las Vegas, GPJ’s Esports production team worked under tight deadlines to produce 2 full days of programming with numerous interactive touch points for casual and diehard fans on the streaming platform and on social media.  With $350,000 on the line, the final 32 players battled it out across the two jaw-dropping stages complete with audio, lighting and digital displays. Each round garnered millions of views as a proper celebration of Street Fighter and its 30 years in the gaming consciousness. 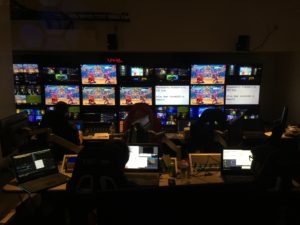