Acura is the official automotive partner of the Sundance Film Festival, bringing its 125-strong fleet of MDX’s to Park City, UT to shuttle talent, jurors and staff.

George P. Johnson (GPJ) and Acura have partnered for 9 years to create authentic and engaging Acura brand experiences at Sundance, and 2019 was perhaps the best yet. 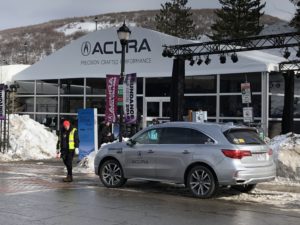 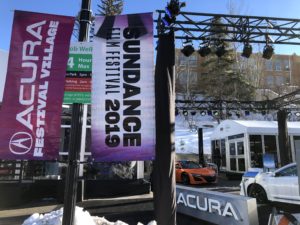 Whether between films, panels, premiere parties or just looking to warm fingers and toes, consumers were welcomed into the Festival Village, which for its second year took over an entire City Hall parking lot. Acura and GPJ designed and built a consumer-friendly hub featuring complimentary coffee and tea, charging stations and a covered heated patio complete with a stage for panels and entertainment. Meanwhile, the entire Acura lineup was on display just outside, anchored by its flashy, thermal orange pearl NSX supercar, all accompanied by product specialists beckoning consumers to take a seat. 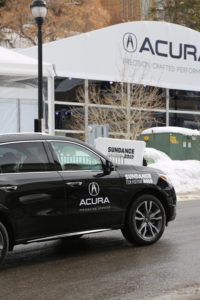 Once inside, consumers could take a photo amidst a winter wonderland scene with film director props that was then digitally framed with Acura branding and e-mailed on the spot. Hot beverages from Campos coffee were complimentary, but attendees who registered with a brand rep got added perks: a branded water bottle and two complimentary beers from beverage partner Stella, served from 4 to 6 p.m. every day from an airstream trailer in the patio area. During these “Acura Hours,” consumers lounged around fire pits with propane flame heaters and enjoyed talented programming on stage, from acoustic concerts to film panels. Across the nine-day activation, G7 took a “curated discovery” approach to programming, with a dynamic lineup of power acoustic sets, thought provoking panels, high-energy headliners, and a resident celebrity DJ, creating precision crafted performances day and night. For the first time, Acura also teamed up with IMDb on certain days of the festival, during which filmmaker Kevin Smith interviewed actors, directors and writers. In this clip from IMDb, actor Vince Vaughn shares how impressed he is with the Acura Village.

The Festival Village by Acura was no doubt the premier entertainment destination at the Sundance Film Festival, a perfect match with the Acura brand message: Precision Crafted Performance.